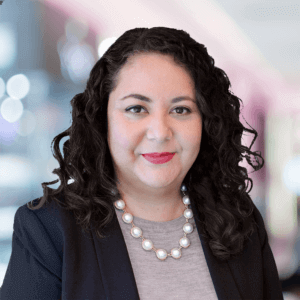 Evalueserve is celebrating its 15th year of operations in Chile. To celebrate this incredible milestone, Evalueserve Chile begins a 15-day celebration today.

We spoke with Evalueserve’s Chile Country Head Carolina Zamora to discuss what this milestone signifies. Zamora began her Evalueserve Chile journey a year-and-half after the company began operations in Chile in 2006. We sat down with her to discuss some of Evalueserve’s milestones in South America.

You’ve been with Evalueserve Chile for most of the 15 years, correct?

Correct, I have been here for almost 14 years. I remember feeling like I was coming into a team that was already settled. It’s unreal just to think about how that was super early days for the center, and how much we have grown over the past 15 years.

Our solutions have matured. We were doing a lot of knowledge process outsourcing (KPO) when I joined. The type of solutions that the team provides now are much more complex and end-to-end. We are doing more solutioning with our clients, and the work our teams are doing is much more enriching for their personal growth as well.

When we first started here in Chile, we brought in a lot of talent from other countries because we just couldn’t find the right skillset locally. Since 2008, when I joined, to today we have seen that percentage of Chilean talent in the company grow to almost 70% and a lot of it has to do with the talent development programs we’ve started at the Chile center. This has been a great thing because we have been able to replicate and share some Evalueserve global knowledge into the local talent market.

What does it mean to you to see all these different people that worked and continue to work at Evalueserve?

To me it’s just extremely rewarding. All of us that work or have worked at Evalueserve Chile have the same sentiment that it is about the people, and the teams that you work with. Every day I am in awe at how incredibly smart our team is. They are not afraid to ask any questions. They come up with solutions that we wouldn’t have ever thought of or great innovative ideas to make work-life better.

Just to see how many people have gone through the different roles that we’ve had, and a lot of them are still with us. Some have moved on to other roles in local or international companies, and we see them from a distance in successful roles. Some of them return as clients, some of them return as consultants. And it’s just been an amazing journey for sure.

Tell us about your personal experience a little bit and what it means for you and your team.

For me personally, being in Evalueserve has been a rewarding experience. I was referred to the company by a friend of mine who told me this company in Chile is hiring people like you, would you be interested? I was finishing a master’s degree and wanted to see what was out there. On a whim, I decided to explore Chile.

After joining Evalueserve, from the get-go I was very impressed with the quality of the people, the diversity of cultures. We had colleagues from India, from Brazil, from Chile, from other Latin American countries as well. So right off the bat, it just pumped me up. It was a different type of energy from any other company that I worked in before.

I remember my first project, an intense primary research project that was all-hands on deck. After a while on this project, I expressed to my manager that I thought I could contribute more given my prior experience. He made me project manager for a different project that was just getting started, which surprised in a positive way. By asking for more responsibilities, my manager was willing to give me a stretch role that led to career progression, and that has been my experience ever since. After a couple years of being a project manager in that team I became the site lead for a new account, then I was given opportunity to lead the financial services division in Chile. Finally, in 2018, I became the country head for the center. I’ve always felt recognized and valued and this is the feeling that I want to make sure everyone in my team has.

You also have a couple celebrations planned. What does a Chilean corporate party look like for those of us that are not there? Where could people see some of this celebration online?

We have a few surprises planned for the team. I wish that we could have a big party like we used to, but because of COVID protocols we’re just going to have to do a little bit more of a hybrid celebration. Normally it’s a very happy event where people dance a lot, there’s a lot of music, there’s a lot of laughing. We’re going to try to replicate that with an in-person event, which is going to be smaller in scale obviously, and through a series of virtual events where everyone can join in.

We do have a Facebook page that is open to the external audience. So, we’re going to be posting some of these celebrations and milestones on Facebook at @EvalueserveChile.

Let’s say somebody is watching this or seeing this or reading this, and they’re interested in learning more about Evalueserve Chile, are you guys recruiting?

We are and always want to hear from those looking for the perfect role. Send us your resume, we have positions open for research & insights, analytics, and more. You can find the link in our website of how you can contact us, and now that immigration has reopened back in Chile, we’re not just looking for people in country, we are also open to regional and global talent. So, if you want to join us, please reach out.

A competitive win/loss analysis is a thorough discovery process that enables companies to dive deep into their customers’ motivations and objections. It reveals the true reasons behind a purchase, or behind the decision not to buy something.

Learn about the fast-changing requirements in chemical safety, toxicology and regulatory space and how we can help companies to quickly adapt.