Experiences of a Lifetime!

Wow – Evalueserve turns 20! I am so proud to have been there for the first 15, so pardon me for the long list of my memories here. This has been a truly wistful exercise to look back and write my thoughts. 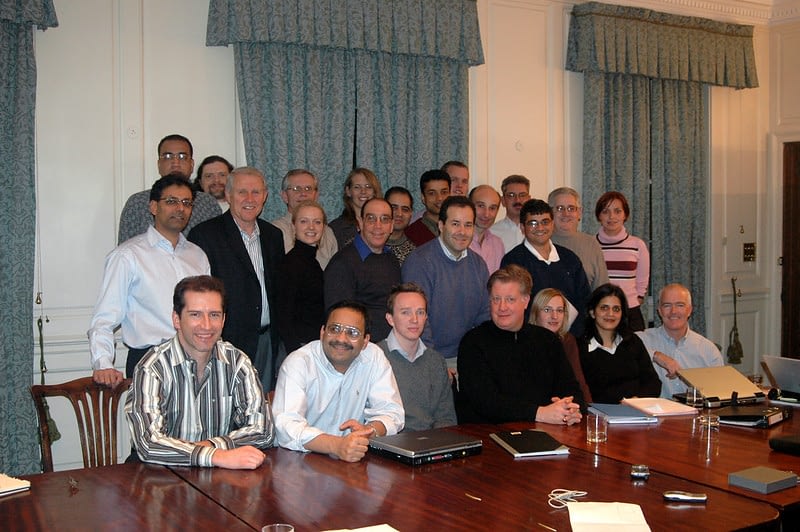 It was mid-2000 when I reconnected with my old and dear university pal, Bob Daigle, who shared that he was leaving a long and successful career at IBM to join a startup called “Evalueserve.com”. He thought perhaps I would be interested in joining him to help build the sales organization from scratch – it was certainly intriguing. As I considered making the move from my solid management role at a well-established US telecom firm, many suggested I was crazy. At that time, startups from the first “dot com boom” were imploding all around us. But after speaking at length with Marc and Alok, and the comfort of knowing that I would have Bob as a colleague, I took the leap and officially joined as Evalueserve’s first “sales rep” in April 2001. Twenty years later, I have zero regrets about making this move.

At that time, I was 41 years old and the raw excitement of living on the edge, selling services I had no direct experience with while inventing new ideas and marketing plans was challenging, invigorating, and inspiring at the same time. By September 11, 2001, the firm was probably 3 people in Europe, 3 in the US, and 20–25 in Delhi / Gurgaon) and it was a momentous day that could have derailed everything we worked for. The team buckled down, and we persevered with patience and tenacity to come out successfully on the other side.

Today, I am amused that in this COVID-19 pandemic, the work-at-home model is suddenly being “discovered”. Evalueserve was truly at the forefront of the global virtual business model. A fun fact to illustrate is that while Evalueserve was founded in 2000, it was not until January 2005 that the co-founders (Marc and Alok), Head of Operations (Ashish Gupta) and the Head of Sales (Bob Daigle) of Evalueserve were ever in the same room at the same time!

In those early days of working from home, we survived on AOL’s Instant Messaging and various free audio conference services, until Skype came along and became a key communications platform for us. I managed clients of all shapes and sizes with a wide variety of service needs. I sold IP patent drafting to very small startups, business research to established research houses, and we ramped up an entire new market research division to augment their research business. No one else was providing high-quality primary market surveys (from India) at that time, and we quickly carved our niche.

I also remember working through the night to deliver a proposal to a top tier investment bank that our shipping provider had somehow lost in transit. We ultimately won the project that led to 75 FTEs. Much larger deals and more complex deals with customers such as a big 4 consulting firm came later. I have many great memories for sure. What really kept me going was that I learned something new every day and my colleagues were simply the best.

I could write a book of funny Evalueserve stories, but maybe “restricted viewership” and checking with other former colleagues would be a good idea before sharing. Among some of us “erstwhile” sales folks, we could definitely come up with a bestseller!

I am embarrassed to confess but I was your stereotypical obnoxious American who thought “our way” of doing things was the only way. So my advice to my younger self would be to be open-minded and patient. I struggled with both of these traits early on as I continued to learn about many new cultures.

My sales success was nice of course, but I do have several accomplishments I am proud of that can’t be measured in revenue dollars.

It took 10 years but I (along with Pat Tobin) was finally able to convince the team that we needed a proper annual sales recognition awards program to acknowledge the big sales wins and best stories of the preceding year. The first ceremony in Washington DC also marked Evalueserve’s 10th anniversary. Even though the trophies we presented were of questionable and comical manufacturing quality, everyone considered the awards program a success and from what I understand these ceremonies have carried on.

I am also proud that I was able to help my local alma mater, the University of Hartford, complete many impactful CSR engineering projects in tandem with Dr. Kiran Bedi’s Navjyoti Foundation, a relationship that continues today. I have to give a nod to my great friend, Radhika Mathur, who helped guide us through the start and to Deepak Batra who has helped keep the momentum going.

Interestingly, Evalueserve’s early management team was all men, and I remember Alok referring to me as “Evalueserve’s mother” … a comment made somewhat in jest, but I am proud there was a ring of truth to it.

And I have to say I am proud to be the firm’s first-ever “Legend Award” recipient. I was honored, touched, and of course roasted by my many Evalueserve friends in Barcelona, with my wife and daughters by my side. I’ll never forget that night or my great experience at Evalueserve.