‘Depressing’ is the word many would use to describe the past one year or so after being locked up in our homes and seeing disturbing images of protests (black-lives matter, Beirut blast, India’s farmers' agitation, and anti-lockdown protests among others)  on our television screens. This same medium transmitted images of Joe Biden’s presidential campaign and a range of ‘generous’ election promises as he rallied from the east to west coast.  After assuming office, President Biden delivered on his first promise and approved a $1.9tn stimulus package in early March this year to boost the pandemic-hit economy, which was preceded by a $900bn stimulus in December 2020 and a massive $2.2tn relief package in March 2020, both of which were approved under the Trump administration.

While these measures provided much‑needed direct cash payouts to American households during the pandemic, the Biden administration has been pushing a two-part spending package that would cost $3-4tn over the next decade and would focus on infrastructure, combating climate change, and education. The first part of the spending centered mostly on infrastructure was announced on March 31st and will cost about $2.3tn. The budget would be spread out over eight years and facilitate the maintenance of roadways and bridges, the expansion of broadband connectivity, and an increase in research & development funding. The second part of the spending dubbed as American Families Plan was announced during Biden’s speech to Congress on April 28 and will cost about $1.8tn. The plan will guarantee two years of free universal community college, free prekindergarten for 3 and 4 years old, and 12-weeks of paid family and medical leaves for American workers, among others.

During their election campaign last year, the Democrats stated they would reverse the Republican’s 2017 tax cuts by raising the corporate tax from 21% to 28%, doubling the capital gains tax rate for those earning more than $1 million a year and increasing the top marginal income tax rate (those making over $400k a year) from 37% to 39.6%, among others. The Biden administration is now making good on this election promise to fire up the economy. Biden’s ambitious $3-4tn in spending to boost the long-term growth fundamentals will likely be partially financed through tax increases, unlike the last three stimulus packages which were majorly financed through borrowing, i.e., widening the budget deficit. "Failing to make these investments adds to our debt and effectively puts our children at a disadvantage relative to our competitors…," President Biden stated in his speech “…Ninety-one Fortune 500 Companies, including Amazon, pay not a single solitary penny in income tax. Wall Street didn’t build this country, you, the great middle class, built this country. And unions built the middle class,” Biden added as he attempted to justify the increase in corporate income tax. 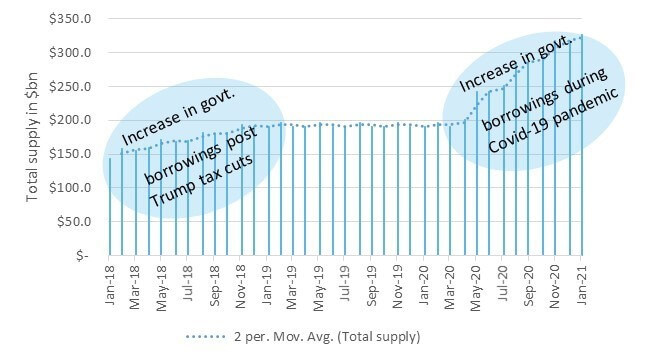 Description: As shown in Figure 1, auction sizes have increased across all maturities as the three stimulus packages announced in the wake of the COVID-19 crisis were deficit-financed. Looking back, the shortfall in revenue collection owing to Trump’s 2017 tax cuts was also financed through the government borrowings, forcing the Treasury to raise auction sizes across all sectors. Source: US Treasury Department.

No good deed goes unpunished and so have the proposed tax hikes that have had their fair share of bashing. The most vocal and prominent critic is the Americans for Prosperity, a conservative political advocacy group funded by the Koch brothers. The group has contested the recent proposal, arguing the Trump tax cuts were a “tremendous win1” for the American people and that any increase in taxes would strain the economic recovery. In a recent study, the Heritage Foundation2 found that US workers bear more than 70% cost of corporate income taxes through lower wages. The cuts were implemented to make the US appear lucrative, allowing multinational companies to expand within the country without having to look for a more favorable tax regime abroad. The Tax Foundation3, an independent research agency, estimates that Biden’s tax reform would shrink the country’s gross domestic product by 1.62% over the long term. The proposed plans have also faced backlash from Republican lawmakers.

On the contrary, Janet Yellen, the new Treasury secretary, defended funding the large-scale spending through tax increases, assuring that fiscal reforms are necessary and the new administration would not do anything to hurt small businesses and lower- to middle-income American households. The tax reforms are expected to increase federal revenues by about $2.1tn4 over a decade.

Figure 2: Tax revenues as a percentage of GDP vs. corporate income tax 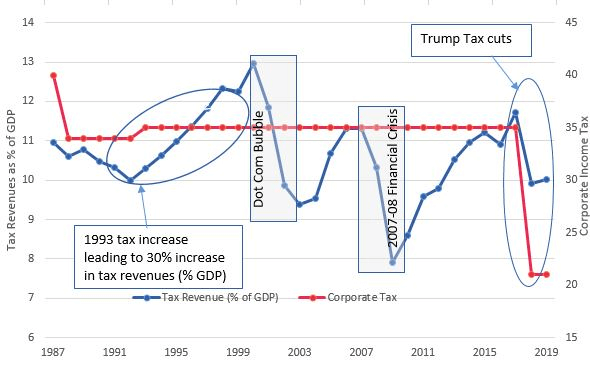 Description: As shown in Figure 2, tax cuts in 2017 led the tax revenue-to-GDP ratio to collapse from 11.7% to ~10% in 2019. Looking back a 1% increase in corporate tax in 1993 contributed to about 30% growth in tax revenue-to-GDP ratio over the following eight years. Similarly Biden’s proposed tax hikes could result in a $2.1tn increase in the federal revenues over the next decade. Source: The World Bank.

The center point of these reforms remain that it aims to secure funding without having to exert additional pressure on fiscal deficit, given that the national debt levels are at record highs, and this appears to be the most prudent outcome, in our opinion. This new round of spending would not lead to a sudden spurt in auction size, as it would be financed through proposed tax increases, thus deviating from its previous strategy of deficit financing. With federal debt mounting to record levels and a fiscal deficit ending September 2020 equivalent to ~15% of GDP (as shown in Figure 3), a level not seen since World War II, the US Treasury Department appears to have little ammunition to stick to government-backed borrowings only. 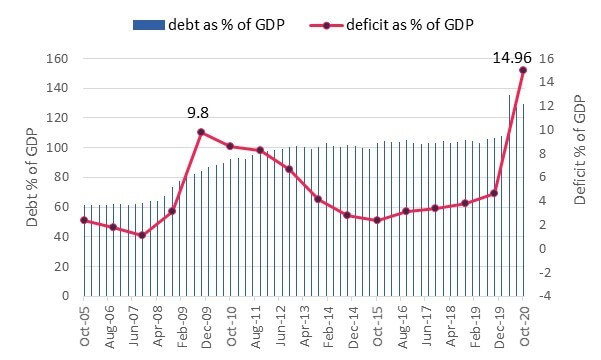 Description: The US Debt-to-GDP and Deficit-to-GDP ratios are hovering around their all-time record levels, thus significantly curtailing the Treasury’s ability to go for additional borrowings in our opinion. The current Deficit-to-GDP ratio has exceeded the previous peak levels recorded following the 2007-08 financial crisis. For the fiscal year ending September 2020, the ratio had increased to about 15% following the massive $2.2tr stimulus package in March 2020. Source: Fred.stlouisfed.org.

The U.S. government has already handed out hefty paychecks to the American people in the past year, and the latest round of spending comes on top of those fiscal stimulus packages. However, the US Fed Chair, Jerome Powell, has downplayed the inflation risk posed by a potential surge in consumer spending, asserting that “inflation will be neither particularly large nor persistent.5” Powell goes on to add that he remains committed to supporting the economy and the Fed has no plans to curtail its asset purchase program in the foreseeable future, despite the GDP expecting to grow 6.5% this fiscal year after contracting 3.5% in 2020. 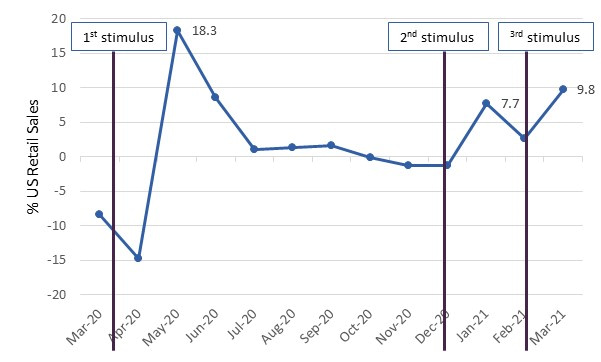 The Fed’s accommodative stance during the pandemic caused an enormous expansion in its balance sheet and its asset base, which already were at elevated levels following the financial crisis of 2008, increased from $4.3tn in March 2020 to $7.7tn in March 2021 (as shown in Figure 5).

Powell has vowed to maintain its asset purchase program, and this trend is likely to extend into next year6, with no possible change in the fed rate until 2023. The quantitative easing (QE) coupled with near-zero interest rates could spiral higher inflation, similar to what was observed following the 2008 QE program and March 2020 asset purchase by the Fed (refer to Figure 5).

Figure 5: The Fed balance sheet at a record high following QE that began in March 2020 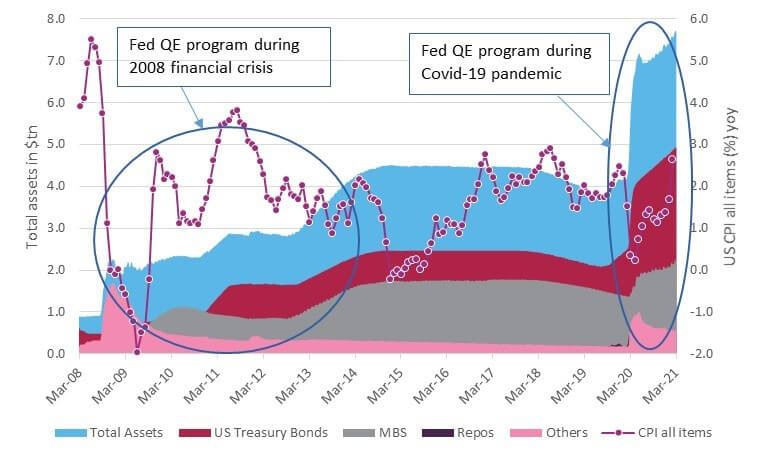 Description: The Fed's total asset base has expanded to an all-time high following the quantitative easing that began in March 2020, with CPI (RHS) also inching higher to c3% levels. Historically, the same trend has been observed following the asset purchase program that kicked in during the aftermath of the 2008 financial crisis. Source: Fred.stlouisfed.org.

The US 10-year benchmark yield rose to 1.74% on March 31st after President Biden announced the $2.3tn infrastructure spending plan. Stronger economic activity and higher inflation mean the yield curve could steepen in the near future. It would be interesting to see if the Fed implements yield curve control measures, although, Powell has maintained that he will let the economy overheat if it helps achieve full employment7.

Powell’s pledge to uphold the current level of asset purchase programs for as long as necessary could add to inflationary pressure in the near-to-medium term,  as the asset reserves are seen as a component of the monetary base. It would be interesting to see if the Fed moves to tighten measures if the core inflation hits the 2.0% target earlier than expected, however, in its most recent Federal Open Market Committee meeting, the Fed maintained that the bank does not expect to raise interest rates until 2023.

Many would argue that the country’s infrastructure is in dire need of a facelift and that it needs to reposition itself on various fronts that include alternative energy, high-tech manufacturing, and a robust social system. What remains to be seen is how well President Biden defends his plans in Congress as he tries to convince his fellow lawmakers that the price tag is not too high. The sway Democrats hold both in the House and the Senate may enable a smooth pathway for these reforms, but we cannot rule out the possibility of acceptance of an altered version, with reports8 emerging that the Biden administration could agree to a 25% corporate tax instead of the proposed 28% in a compromise with business groups.

Even if his plans hit a snag in Congress, there are other alternatives, in our view, such as a hike in taxes, including on personal income, gas, mileage and electricity consumption, which the Biden administration could consider to secure funding for his mega spending plan. An additional debt financing measure such as a resurrection of Build America Bonds (a special class of municipal bonds that allow states and counties to float debt with interest rates subsidized by the federal government), which were issued after the 2007-08 financial crisis, could also be on cards. However, such a move would only partly shift the debt burden from the Federal government’s balance sheet to respective states and counties.

The proposed plan would lead to direct and indirect job creation, as more than $600bn will be pumped into infrastructure that would see modernizing of rails, roads and bridges, and high broadband connectivity. A major part of the spending will be directed towards efforts like affordable housing, improving veteran hospitals, and providing incentives to the high-end manufacturing sector. However, tax reforms could be a double-edged sword as additional costs, due to an increase in corporate income tax, are likely to be borne by average American workers who may face lower wage rates and a decline in disposable incomes. This could in turn negatively impact aggregate consumption and potentially weigh down the GDP until the multiplier effect kicks in.

Bhashkar Upadhyay works for Evalueserve as a Lead analyst (Financial Services) and has more than eight years of experience working in different sectors, including Energy and Rates & Relative Value. He is currently covering the US debt market and is responsible for performing quantitative and macro research, data gathering and analysis, modeling, and report writing. He has also driven several automation initiatives, conducted internal workshops and training, and has been recognized for his efforts at a group and company level at multiple occasions.

Don’t hesitate, get in touch with Bhashkar.