Aviation as an industry has suffered a massive blow due to the Covid-19 pandemic. With the restrictions on domestic and international travel and freight slowly opening up, the industry is inching back to normalcy. However, the recovery to pre-2019 levels could take a while from a decline of around 66% in air travel during 2020, compared to 2019. During the same period, various governments also aligned with the climate change mitigation goals listed under the UN Paris Climate Accord towards a net-zero carbon emissions economy. In the European Union (EU), the most recent major announcement comes from Germany, which has outlined its roadmap for the use of power-to-liquid (PtL) fuels for its aviation industry.

How ambitious are these PtL roadmap goals? We find out:

There are various methods to produce SAF, including FT-SPK, HEFA-SPK, HFS-SIP, FT-SPK/A, ATJ-SPK and CHJ. The Fischer-Tropsch synthesis process, which creates FT-SPK – Fischer-Tropsch Synthetic Paraffinic Kerosene is widely regarded as one of the main methods to produce PtL fuel. It is even approved by the American Society for Testing Materials (ASTM). The process dates back to 1923, when chemists Franz Fischer and Hans Tropsch decided on this novel method to convert coal into a new synthetic fuel using gasification and synthesis of hydrogen and carbon feedstocks. Modern-day PtL production can be simplified as: 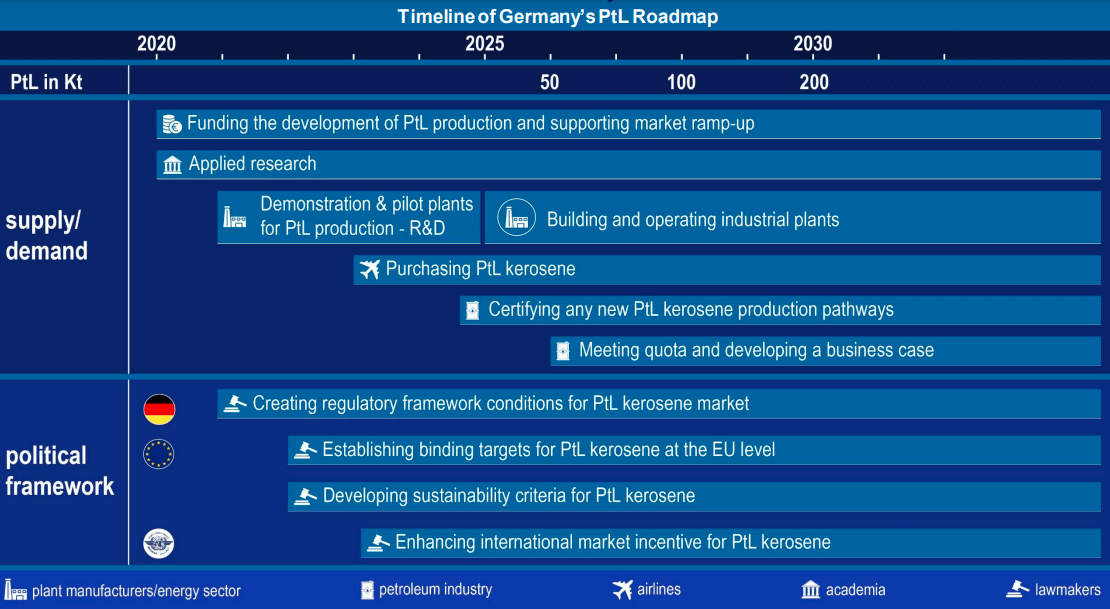 Advantage 1: The PtL Roadmap agreed upon by the German Federal Government’s Ministry of Transport and Digital Infrastructure (BMVI) and the German Aviation Association (BDL) which represents the country’s aviation industry has a major point going for it in that it will have an immediate effect of the CO2 emissions. As part of the process is carbon capture, which can be obtained via carbon capture from unavoidable CO2 sources such as bioenergy plants and industry, it can drastically cut down on the overall CO2 emissions. In addition, the other major component of the fuel is green hydrogen, also sustainably sourced from renewable electricity. This lends credence to the concept of emissions-free aviation.

Challenge 1: However, while the PtL fuels have their ecological edge and are technically proven, their manufacturing costs remain a major challenge. PtL fuels cost between 3 to 6 times more than conventional jet fuel. The reason behind this is PtL fuels not having been produced in quantities which can help them achieve the economies of scale. The Roadmap shows the way forward with a ramp-up that is help while also being economically sound.

Advantage 2: Industry players part of the agreement have also volunteered to set up plants for the manufacture of PtL kerosene. The fuel blend can be transportedusing existing infrastructure, from manufacturers and refuel warehouses at airports to the aircraft itself. There is also advocacy for using the Central European Pipeline System (CEPS) but that will require approval from all NATO members states. Industry players involved are advocating for both Fischer-Tropsch synthesis as well as alcohol-based conversion routes as well as other production technologies so as to enable additional production pathways without favouring a specific technology. Approval for new fuels used to take much longer, with the first ever such approval taking around 9 years and required thousands of tonnes of aviation fuel to be tested. ASTM and its European counterpart, DefStan, now have furthered their processes to require only a couple of years, with testing quantities being no more than a few hundred tonnes.

Challenge 2: The one big drawback is that PtL fuel production via the green hydrogen route can taxing on the electric supply. It takes as much as 4 times the input of renewable electricity to output one-part PtL kerosene. This, again, means that subsidised or incentivised power purchase agreements(PPAs) to the benefit of PtL producers will need be enacted to rapidly reach price parity, and only additional renewable energy will need to be used to ensure no bottlenecks to the existing power grid. The PPA and its related guarantees will only be formulated on the basis of conditions for green power purchaseto be set by the European Commission by 2021-end. The roadmap signees support revising of the state-initiated components in electricity prices outlined under Germany’s National Hydrogen Mission, seeking exemption from surcharges on green hydrogen production by Germany’s RenewableEnergy Act. However, again, this will all depended on the upcoming EU guidelines. There could be concerns if the act is not framed in favour of the planned market ramp-up.

Advantage 3: However, to alleviate concerns over competing SAF types, Germany’s policy does mention that they do no wish to focus on only a
specific fuel type to keep competitiveness in check. In addition, more SAF options will only aid the growth of the alternative aviation fuels market, further enabling the market to mature by the time Germany’s PtL fuels are introduced. Being early adopters of this technology, Germany will have a big say in the sustainability standards for PtL fuels which are yet to uniformed and adopted globally. If this goes through, it will support not just their domestic market ramp-up but also in international ones. Sustainability criteria under CORSIA is also set to get additional amendments by the end of CORSIA’s pilot phase in 0 3, giving Germany a leg-up in its formulation, as well as in that of the EU’s RED II, which so far prescribes 70% emission reductions for electricity-based fuels.

Challenge 3: There are other SAF types, including those generated from waste and residues including cooking oil, animal fat, vegetable oil, corn oil and fish fat as feedstock, which are already proven and for the Neste MY SAF. The growth of these and other alternative fuels such as those made from lignocellulosic feedstock, municipal solid waste, algae among others in the near future could hamper Germany’s PtL plans. The currently permissible blend of 50% PtL kerosene into conventional jet fuel requires no technological upgrades. However, if this blend is to exceed 50%, its impact on the propulsion system, and the refuelling infrastructure needs to be investigated. Subject to the test results, the propulsion and refuelling systems might need to undergo modification. This research will be key to answering which generations of existing aircraft fleets will be able to use the higher blend. This will have a bearing on the next major expenseto airline operators, when time comes to upgrade their fleets.

Germany’s PtL Roadmap harps on two major factors – the country’s own National Hydrogen Mission, and on the potential for revisions to existing sustainability criteria in the EU and globally, as well as for setting up of sustainability standards that support its planned market ramp up. From current projections, Germany is planning ahead to the introduction of 50 kt of PtL kerosene for domestic air traffic in 2026, which is merely 0.5% of its total aviation fuel projections, then escalating gradually every two years, with 100 kt (1%) in 2028 and 200 kt (2%) in 2030, substantial but not overbearing. From this angle, the Roadmap does not seem over-ambitious. However, this will only become clearer when governing bodies such as the European Commission, the ICAO, and their decarbonisation missions including CORSIA, RED II and the RefuelEU Aviation initiative support what Germany’s aviation industry is advocating – the creation of framework conditions and standards that support PtL kerosene marketing through subsidies, incentives and a mandated sub-quota within their regulations for PtL kerosene.

How all this activity gets listed under the European Emissions Trading System (EU-ETS) will also weigh in on the success of the Roadmap. EU-ETS allows for carbon offset credits to be auctioned in place of outright biofuels purchase. Germany wants PtL kerosene credits to be included in the EU-ETS as GHG reduction credits if airlines buy more than the mandated quota of PtL. This will help them reach carbon neutrality sooner and also help push the National Hydrogen Mission. We see Germany’s PtL Roadmap as a smart move on the part of the government and industry to come together and make a strong foothold in the future of aviation and aviation fuel industries, while also benefitting local hydrogen project ramp-up and remaining influential in the standardisation of PtL kerosene across the globe.

To discover how you can adapt for tomorrow, contact decarbonization@evalueserve.com .