Can Libra be a reliable payment method in a post-Covid-19 world?

On June 18, 2019, Facebook surprised the market by announcing its intention to launch Libra, a new global currency powered by blockchain technology. The new cryptocurrency, expected to be rolled out by the end of the year, will be managed by Calibra, Facebook’s newly created subsidiary. Calibra’s digital wallet will eventually enable users of Facebook Messenger, WhatsApp, and Facebook’s standalone mobile application to easily send and receive Libra coins to other users on a smartphone.

A potential game-changer for the payments industry

According to Facebook, the key figures that support the launch of Libra are:

Libra seeks to facilitate worldwide payments and money transfers by reducing the traditional chain of multiple intermediaries (credit card operators, payment processing firms, banks, money transfer firms, etc.) and by providing financial services that are currently not accessible to a large part of the populace.

A reduction in intermediaries would directly translate into lower transaction fees and higher transaction speed for the involved parties. Considering there are 2.1 billion monthly active users of Facebook, such a product could theoretically create a huge challenge for traditional payment industry players such as banks, money transfer companies, and other financial institutions.

How Libra could reshape the payments industry 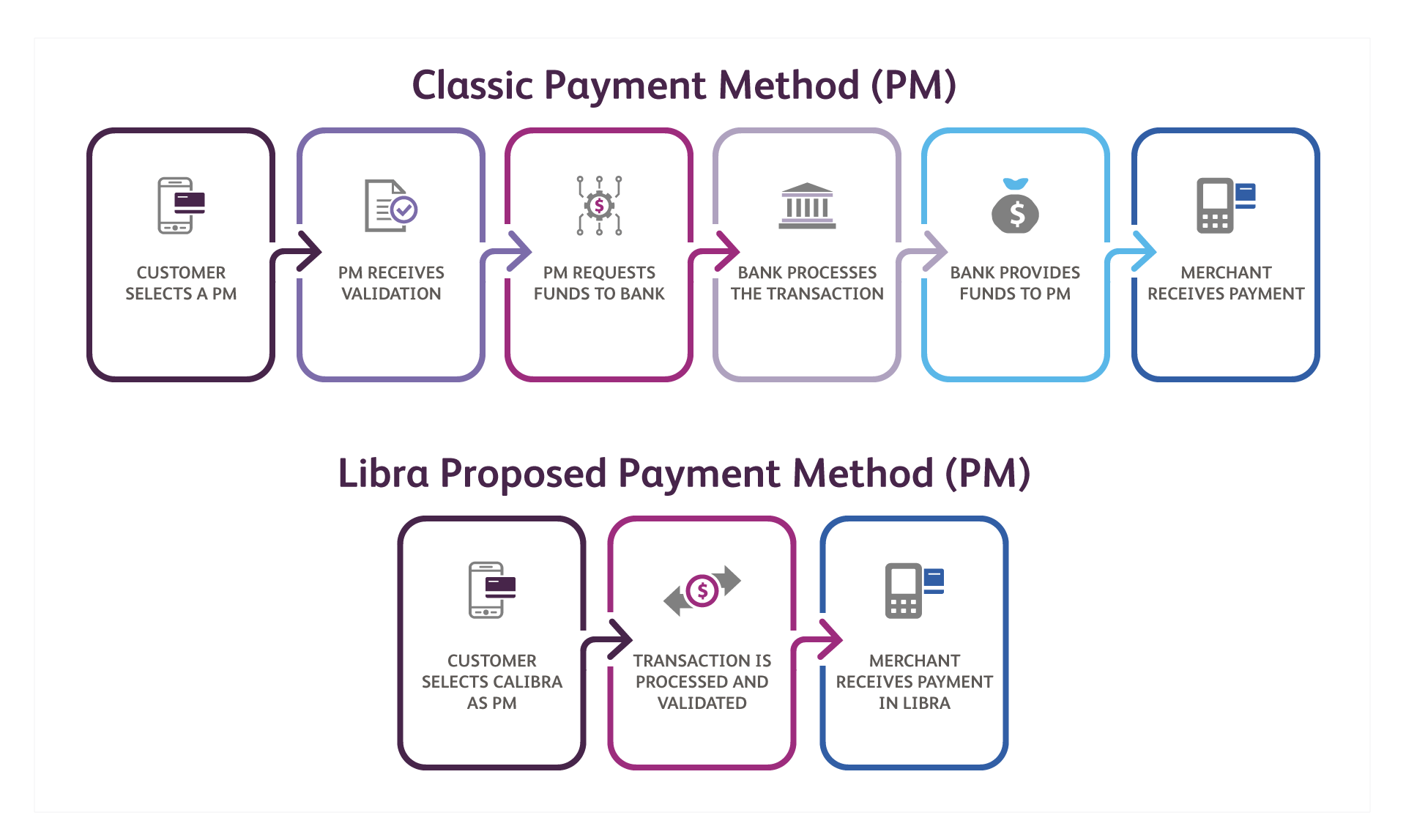 A large but uncertain pool of potential users

To figure out the potential impact of Libra, let’s review key statistics on users of Facebook as well as the major payment industry players. Facebook had 1.66 billion daily active users and 2.50 billion monthly active users in December 2019. More than 2.2 billion of these are likely to be daily users of Facebook’s “family of services,” which includes Facebook, Instagram, WhatsApp and Facebook Messenger. On the other hand, Visa had 340 million credit card holders and MasterCard had 261million , while Mercado Pago had 321 million active accounts and PayPal had 305 million (as of December 2019). Considering that each one of Facebook’s users could potentially move from these traditional payments services to Libra, its potential user base is immense. To strengthen the power of this potential user, a study conducted by the financial consultancy deVere Group determined that the COVID-19 pandemic has fueled a 72% increase in the use of financial technology (Fintech) apps in Europe since mid-March, which has expanded the Fintech market beyond what was expected. However, the question remains, how many of these users will adopt Libra for monetary transactions?

In light of these facts, Libra Association, the non-profit organization working to “spur the development of a robust ecosystem of financial products and services that allow people to use Libra,” has had to rework its approach to solve these trust issues that may otherwise hamper the adoption of the cryptocurrency. It also has to deal with another problem – the lack of willingness to use cryptocurrencies. According to a survey by the Foundation for Interwallet Operability (FIO), 70% of cryptocurrency holders never or rarely use them as a payment method. Other surveys also showed a similar trend. During the COVID-19 pandemic, one of the fears that has arisen from users of cryptocurrencies and Fintech apps as well as the regulatory bodies are the scams that could occur from an increase in online monetary transactions. In this context, research conducted by the blockchain analysis company Chainalysis explained that while most of the phishing and blackmail attempts have been linked to topics related to the virus, the cryptocurrency price drops spurred by the pandemic have drastically reduced the potential revenue/losses resulting from the biggest scams.

Headwinds along the way

In addition to fielding the concerns over trust, Facebook is also facing questions on cyber security from national and international authorities and regulators who came back on the company quickly after its announcement of Libra. All of these concerns have become heightened by statements from President Trump that cryptocurrencies could facilitate unlawful behaviors, and he highlighted that if Facebook and other companies want to become banks, they would be subject to banking regulations. Federal Reserve Chairman Jerome Powell, French Finance Minister Bruno Le Maire, and Bank of England Governor Mark Carney articulated similar reservations and warnings.

Since the announcement of the Libra project in June 2019, its digital currency guidelines have generated massive pressure on the Libra Association and have resulted in several changes to the project and the delay of its kickoff. As a result of the increased scrutiny, eight worldwide payment companies that were part of the Libra Association (Vodafone, Visa, MasterCard, PayPal, eBay, Stripe, Booking Holdings, and Mercado Pago), which intended to coordinate and provide a framework for governance over the Libra network and reserve, backed out of the project . Moreover, in mid-April 2020, the Libra Association initiated a payment system licensing process with the Swiss Financial Markets Supervisory Authority (FINMA) and announced that plans are now to offer single-currency stablecoins (e.g., USD, EUR, and GBP) in addition to its Libra coins that are backed by multiple currencies. This change shows that the Libra Association incorporated the feedback given by different regulators, representing a substantial change for Libra that would now make the project more like standard digital payments services such a PayPal.

Libra is just preparing to begin its journey and will have many more eyes on it than Bitcoin. It is already being questioned by national and international authorities, with more obstacles likely appear as the project starts to operate worldwide. As of now, we will be monitoring future announcements by Calibra and see how it handles these significant regulatory barriers.

Will Libra ever see daylight, and what it will change?

We expect Facebook to push Libra’s launch to the end of 2020, as Calibra is facing more trouble than it anticipated. In our view, implementation will take place progressively, and it would not be surprising if Libra was not accepted in some countries, at least in the short term. We believe the involvement of the members of Facebook’s “family of services” will be crucial to fostering adoption, which could be achieved through incentives such as discounts and promotions available only to users of the currency. We also believe the need to comply with several regulations will increase Calibra’s costs versus current estimates.

Most importantly, given the discussions over the potential dangers of Libra, we expect governments and financial institutions to start developing an appropriate regulatory framework for cryptocurrencies.

Libra in the context of the COVID-19 pandemic

The crisis triggered by COVID-19 has generated a sudden drop in production and sales in several markets, causing a brutal impact on the major economies in the world, which is reflected by a large increase in the unemployment rate in almost all the countries and by million-dollar losses for companies and for the entire financial industry.

Social distancing as a preventive measure against the spread of COVID-19 has opened up a large opportunity for Fintech companies since digital money is a convenient way to make remote payments and it is considered as the safer payment option to avoid the risk of the online handling of potentially virus-infected physical currency. In our opinion, the pandemic has marked a before and after in the transactional payments industry, and from now on, people and regulators will be much more demanding regarding the conditions and quality of transactions.  In this context, Libra could be one of the more successful competitors in digital transactions due to the large number of potential users that it could derive from Facebook’s social networks and the competitive advantage that the lowest transaction fees in the market (as highlighted in its guidelines) would provide.

In just a few months, the pandemic has destabilized the world, putting in danger lives, businesses, projects, economies, and even the world’s financial system. Despite the fact that the Libra will likely not be released until the end of the year, we believe it has already become a game-changer for the financial industry since it has reactivated the discussion about the financial model for cryptocurrencies, and alongside the pandemic-triggered decline in cash, Libra could continue to spell a major wake-up call for the entire financial industry.

Including Social Media in Your Competitive Intelligence Strategy

CI is used to track and analyze competitors’ strategies, products, activities, and performance. With the rise of social media, this intelligence can be gathered more quickly and easily than ever before.

5 Types of Analytics: Which Will Best Fuel Your Business?

In a recent blog post, we explained how business decision-making has changed and why your business must make data-informed decisions.