How to lower trading cost and volatility

In a previous publication, we discussed the performance of a hypothetical low volatility factor index applied over the Chilean benchmark, IPSA (Factor indices – still too sophisticated for LatAm). We proved that there is a space for such indexes in LatAm, since all market participants wish to benefit from low risk and good performance.

Our experiment showed that our hypothetical IPSA, Low Volatility (IPSALV), outperformed a Rebased IPSA, yielding a higher Sharpe ratio of approximately 0.52 (between 2005 and 2018). This affirmation generated interest and discussion on the possibility of replicating the strategy. Therefore, we decided to simulate an investable index by including trading cost, i.e., the cost associated with buying and selling stocks during the rebalancing period.

To reflect trading cost accurately, we looked at different service providers, and found that their costs vary. As rational investors, we took a conservative option, and selected the service available at the lowest cost from a reliable provider. In Chile, such services typically cost around 100 bps of the total traded amount, plus VAT, which is 19%. Hence, the transaction cost was 120 bps for the total amount traded on every rebalancing date. The cost was relatively high, compared with that in developed markets, where transaction costs range from 2bps to 5 bps.

At first, we added transaction costs to IPSALV, the Low Volatility IPSA with cost (IPSALVWC). We realized that since rebalancing was undertaken on a quarterly basis, the cost of transactions negated most of the gains. The Low Volatility IPSA yielded the same Sharpe ratio as the rebased IPSA (0.41 using 2% as interest rate, in line with the secondary market for inflation-linked bonds). The graph below shows a comparison of the IPSA Rebased against IPSALV and IPSALVWC, and how the IPSALVWC’s performance is similar to that of the IPSA Rebased. 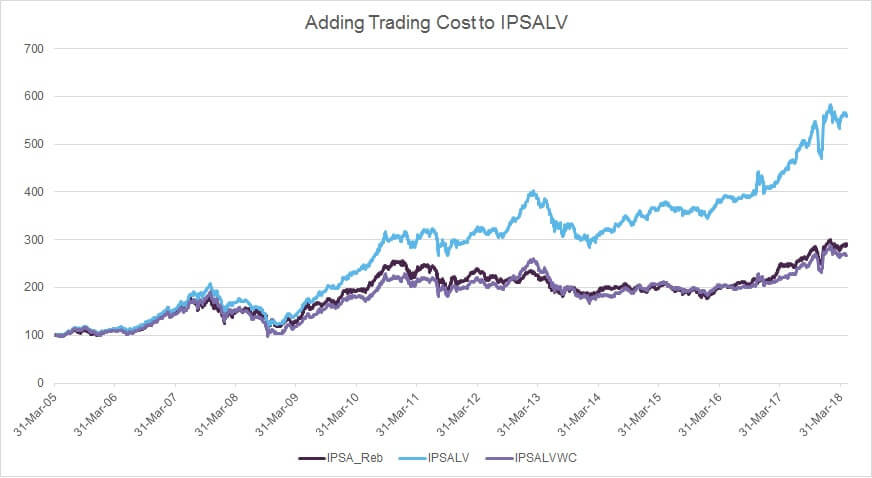 However, despite the additional cost, we recorded similar performance as the benchmark. In order to optimize our cost, we modified our strategy to rebalance once a year, at the end of the first quarter. Our strategy was based on the fact that many companies pay dividends in March.

Next, we calculated another index, where rebalancing could be undertaken beyond annual rebalance under market turmoil. Following the advice of working paper No 462 of the Chilean Central Bank, we included a price volatility index to trigger rebalances under stress episodes. However, we set a limit for the implementation of the trigger – three consecutive days of values higher than the threshold (95th percentile), and only if it occurs after the 20th day of the month. If these conditions were met, a rebalance would be triggered for the end of the month. During the back-tested period, we had rebalances in August 2007, January 2008, and October 2008.

The graph below shows the performance of the new index, with transaction costs; we saw an improvement against the IPSA Rebased, in the long term. 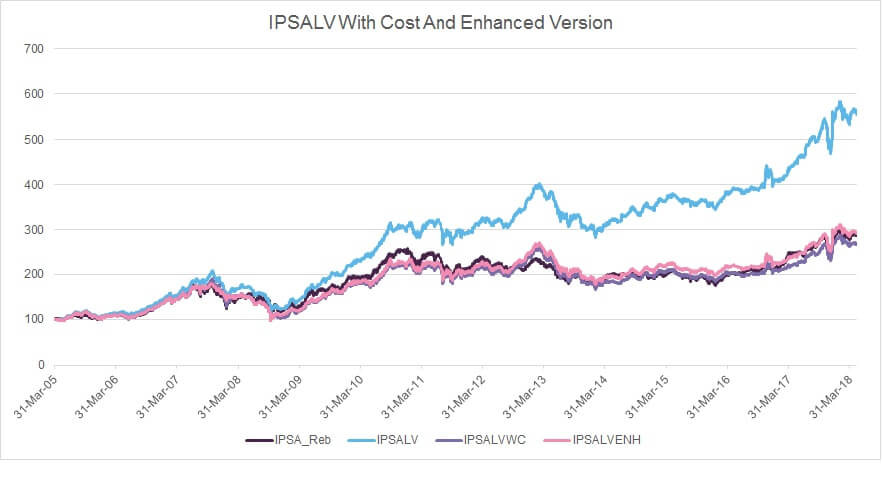 With this experiment, we achieved two main objectives, particularly with the IPSALVENH. We created a strategy that

Comparing the IPSA Low Vol with Cost and Enhanced against the iShares MSCI Chile ETF (ECH, which invests in equity), including a cost of 59 bps, we saw that the Low Vol strategy was successful and showed better performance over the past 10 years (2008–2018). This was supported by Sharpe ratios – iShares MSCI Chile ETF had a negative value (-0.04), while the numbers were positive for Low Vol with Cost and Enhanced (0.13 and 0.14, respectively), using 2% as interest rate, in line with the secondary market for inflation-linked bonds.

We believe the conclusion of our experiment would be of interest to two groups – investors looking for low volatility as an investment strategy, and Chilean market regulators looking to evaluate the cost of equity transactions to create solutions that reduce trading costs.

Don’t hesitate, get in touch with Francisco.