As the 26th UN Climate Change Conference of the Parties (COP26) in Glasgow gets started, let’s take a close look at the aviation industry. Collectives comprising airlines, aircraft and fuel manufacturers as well as government bodies have recently made announcements on coming together to meet sectoral net-zero carbon emission goals based on the Paris Agreement and help limit global warming to 1.5 degrees Celsius. The goals would lower CO2 emissions from aviation, which account for nearly 3% of global CO2 emissions.

One way to achieve this level of decarbonisation increases the use of sustainable aviation fuel (SAF). This action follows the COVID-19 pandemic, which squarely grounded a large portion of commercial aviation activity. While there are still some restrictions on travel in specific geographies, commercial aviation has bounced-back for the most part. All the actors from the aviation space including players, industry bodies as well as policymakers aim to have at least 10 percent of their total jet fuel intake be SAF by 2030. Given the variety of processes to produce SAF and blend it with conventional aviation fuel, there are various business opportunities within the space. Let’s take a closer look: 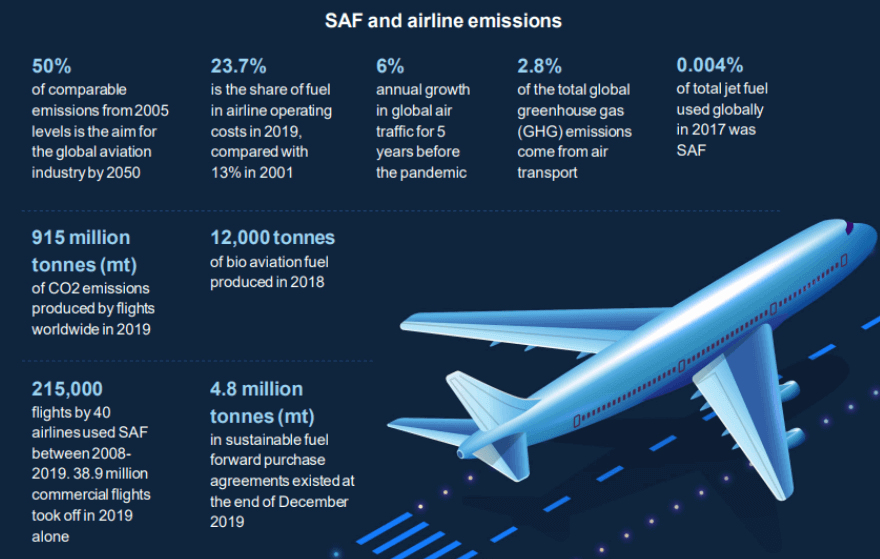 Sustainable aviation fuel (SAF) has no one singular classification standard the world over. However, it is largely agreed that SAF is aviation alternative fuel (AAF) meets sustainability criteria and has a much smaller carbon footprint than conventional jet fuel. AAF can be obtained from sources other than petroleum, including coal, natural gas, biomass as well as hydrogenated fats and oils.

Per the International Air Transport Association (IATA), SAF must have the same qualities and characteristics as conventional jet fuel. This enables SAF use without aircraft and engine redesign or upgrades, and allows airports and fuel suppliers to transport it via existing fuel delivery systems, thereby economizing and promoting its adoption.

Abiding by this IATA specification makes SAF an easy-to-use drop-in fuel, which can be blended with conventional jet fuel (kerosene). Where SAF differs from its conventional counterparts is in-life cycle emissions. The sustainability criteria for SAF has been defined by the Carbon Offsetting and Reduction Scheme for International Aviation (CORSIA). For the European Union (EU), the criteria were defined first under the Renewable Energy Directive (RED) of 2009, which were further reinforced under RED II in 2018. EU Member States were required to enact RED national laws by June 2021.

While CORSIA mandates that SAF should achieve life cycle emissions reductions of at least 10 percent compared to the fossil fuel baseline of 89 grams of CO2 equivalent per megajoule (g C02e/MJ), RED II requires biofuels to achieve a 65 percent reduction in emissions against a fossil fuel baseline of 94 g CO2e/MJ. Despite their ecological benefits, SAF costs are currently between 2 to 8 times that of conventional aviation fuel.

Below are the major pathways for producing SAF on a timeline indicating their technical certification:

These are the current technically certified pathways to produce drop-in SAFs as per the standards of American Society for Testing Materials (ASTM) D7566:

Certified by ASTM in 2009, this process takes coal, natural gas or biomass feedstocks and gasifies them into a syngas of hydrogen and carbon monoxide. This is then catalytically converted into a liquid hydrocarbon fuel blending component inside a FT reactor. One new product of this process is power-to-liquid (PtL) kerosene, which while not yet standardized, and is a point of focus in Germany’s net-zero aviation roadmap. FT-SPK/A is a slight variation of the FT process, certified in 2015, which leads to the production of a fully synthetic AAF containing aromatics.

HEFA received approval from ASTM in 2011. The process utilizes lipid feedstocks including plant or algae oils, animal fats (tallow), or waste cooking oils. It deoxygenates and hydro-processes the feedstocks to produce a pure hydrocarbon fuel blending component. This process is currently being used by various fuel suppliers including Neste, AirBP, and Q8 Aviation among others, in a 30-40% blend with conventional jet fuel.

HH-SPK is one of most recent entrants to this SAF production pathways list, added in May 2020. The process involves hydroprocessing of bio-derived hydrocarbons which come from oils found in a specific algae type – botryococcus braunii. This distinguishes it from the fatty acids or fatty acid esters used in HEFA-SPK.

SIP received ASTM approval in July 2014. Its process is one of fermentation to convert a sugar feedstock into hydrocarbon molecules that can be blended into conventional jet fuel.

Approved by ASTM in April 2016, the ATJ process makes use of dehydration, oligomerization, and hydroprocessing to convert alcohol feedstocks into a pure hydrocarbon fuel blending component. In April 2018, Ethanol was also included as an ATJ feedstock to the standard.

Another 2020 entrant to the ASTM pathways list is hydrothermal liquefaction. The process takes clean free fatty acid (FFA) oil from processing of waste oils and combines it with preheated feedwater, which is then passed to the CH reactor. Here high temperature and pressure produce supercritical water (SCW) and FFAs which are cracked, isomerized, and cyclized into paraffin, isoparaffin, cycloparaffin, and aromatic compounds.

What is enabling and challenging SAF growth?

Emissions: SAF can reduce CO2 emissions by as much as 80% compared to conventional jet fuels.

Costs: SAF costs as much as 2 to 8 times higher than its conventional counterpart.

Scope: IATA pegs 65% of total aviation fuel requirements will be met by SAF by 2050.

Blending wall: At a maximum permissible blend of 50%, there is a lot of scope for SAF to grow. However, exceeding this blend wall will require investigation into the impact it would have on the aircraft’s propulsion systems as well as refueling infrastructure. If higher blends of biofuels in automobiles are anything to go by, exceeding this limit will require significant infrastructure and technology upgradation.

Policy: Policy across a lot of developed geographies, particularly in the EU, is tending heavily towards the increased uptake and promotion of SAF. A lot of precursors to policy regarding sustainable aviation will be seen the upcoming COP26 summit, which will set the tone for the future of sustainability in the sector. Other business and governmental collectives and initiatives such as Clean Skies for Tomorrow (and SAFc) and others are bringing together industry bodies, airlines, fuel suppliers as well as aircraft makers to reach conclusions and drive robust policy change and framework that will enable rapid escalation in the development and acceptance of SAF globally.

Sustainable aviation has a major role to play in abating carbon emissions the world over. Growth in aviation has been an economic indicator since modernisation and will continue to be as this globalised world gets closer and closer knit. Hence, decarbonisation should be weighed well in each activity of this sector to enable achievement of net-zero carbon emissions as close to the targets set by global aviation bodies as possible.

The advent of newer and prototype modes of aviation technology and fuel sources is constantly ongoing and they will play their part in decades to come. The mainstay, from an economic as well as marketable standpoint, however, will be fuels that can power the current and immediately upcoming generations of commercial aircrafts. This works to the advantage of the sustainable aviation fuels (SAFs) which are currently being used and have been classified as drop-in fuels to be blended with conventional jet fuels. With multiple SAF production pathways already standardized and more are in development, there exist a myriad of opportunities in the future of aviation fuels, and each one bears a sustainability badge for its promoters.

This space, hence, brings multiple advantages and avenues for early movers. Making aviation sustainable will require setting up new infrastructure or updating existing setups to meet growing demand for air travel, sustainably sourcing raw material and feedstocks for the various types of SAF, as well as research into and the eventual redesign and optimisation of aircraft engines as well as fuel cells for 50% or higher SAF fuel blends – i.e. when it stops being a drop-in fuel – and more efficiency. With varied feedstocks for different SAF types, opportunities exist within many spheres and stages of the SAF value chain, from the collection, processing of MSW, waste cooking oils and other sources to their actual manufacture as well as transportation and storage systems.

One area of interest where carbon emissions could be a point of concern in this value chain is transport. There exist newer forms of clean transportation and more are in development, which can help abate emissions here. Overall, with the potential of huge carbon savings, there is also scope for mechanism development of trading these carbon credits. A thorough value chain readiness assessment, one of the many ESG services Evalueserve offers, can be a great step forward for entrants in this space, as well as for those looking to increase their skin in the game.

The biggest challenge to SAF at present is cost. Costs for each of the production pathways vary quite a bit from 2 to 8 times over standard jet fuel. This leaves quite some room for more efficient interventions to optimise the value chain. To make SAF cost-competitive and hence preferable over regular jet fuels, the former needs one major push in the form of scale. Scaling will automatically push SAF prices down and make it more marketable. In effect, returning the initial investments made by early movers at present many times over as its uptake follows the projections laid out above. Detailed impact analysis, as well as ESG ratings and reporting can be a good starter for players willing to take the sustainable dip here.

Aviation, as an industry, has the perfect size and hence impact on global emissions to lead by example with a sustainable turn, and the optics of those forging the path ahead will certainly be favourable in today’s real world. Having a cleaner conscience about environmental impact along with cleaner skies will also be critical in times to come. With the economies of scale and stronger, more focused policy framework in favour of their adoption pegged for approval very soon, the sky is the limit for sustainable aviation fuels!

What are Scope 3 Emissions and Why Should Companies Focus on Them?

Scope 3 is broadening the concept of environmental impact which includes all the activities a company’s business calls into being, throughout their supply and distribution chains (the “product lifecycle”).

After the global financial crisis, the Basel Committee on Banking Supervision (BCBS) issued the Basel III reforms to its standards